Once the flight has reached cruising level nothing much will happen in the cockpit and you will be served your lunch/dinner on-board. However Air Traffic Control continues to be busy, ensuring there is no other flight in route of yours, or your flight is not in way of any other aircraft. The Controller is expected to ensure proper margin between your flight and other aircraft in the route.

There are certain standards known as separation minima. Separation between aircraftDepending on the facility available to the controller controlling the sector, these separation minima would be higher or lesser.

While only 5 miles between two aircraft is considered sufficient in case of Radar controlled airspace, minimum 15 minutes are required between two aircraft if no navigational facility (which may allow the reduction in separation) is available. Separation has to be maintained in all three dimensions that is vertical, lateral, & longitudinal, and there are different set of rules for different dimensions. 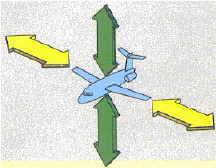 In order to save time and fuel, cockpit crew will normally keep asking for optimum flight levels (height) and this request of the pilots will be acceded to by the controllers as soon as possible. Actually to do so, at times, controllers end up with a lot of jugglery and multiple forecast calculations.

Anyway, while ATC on Ground is busy doing what they need to do, your flight continues and is about to exit jurisdiction of Cybercity Control.