Once the Flight Plan has been accepted by the ARO (ATC Briefing), the crew will board the flight and will carry out the pre-start-up checks on the aircraft, after which your turn to board the aircraft will come.Passengers Boarding the Flight (meanwhile you would've gone through the exercise of baggage checks, personal checks etc. - security requirements - byproduct of the progress by mankind.) While you fasten your belts and take a sip at the welcome drinks served to you on-board, the crew will initiate his call to the Air Traffic Control by calling SMC (Surface Movement Control); 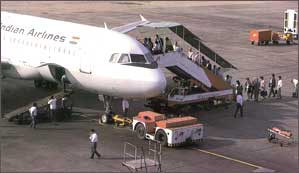 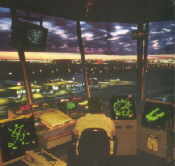 In such case SMC will initiate coordination with the Area Control by calling area controller;
"Cyber Area - Cyber Ground -Netair Zero Zero One starting for Webtown Flight Level Three Three Zero"
Area Controller depending upon the availability of the level will issue clearance or alternate option for the flight to SMC;
"Ground - Area, - Flight Level Three Seven Zero not available for Netair Zero Zero One, expect delay one five (15) minutes for FL370, and FL330".
Now the SMC Controller will call the flight;
"Netair Zero Zero One - Cyber Ground - for Flight Level Three Seven Zero and Three Three Zero expect delay one five minutes, Flight Level Two Niner Zero no-delay"
Aircraft replies
"Ground - Netair Zero Zero One" - "Roger will take delay, request startup for 370" /or alternately/ "request startup for FL290" (In case the crew decided to wait for FL370 and take the delay - the crew /generally/ will inform you that there is an ATC delay for 15 minutes )
Apart from this there could be a scenario wherein there are already quite a few aircraft which have already started and waiting for departure on ground (congestion of traffic at ground); in such situation the SMC controller may not issue a startup approval and may reply;
"Netair Zero Zero One Standby for Startup - you are number 2 for startup and number 6 for departure" indicating that there are already some 4 aircraft awaiting departure (take-off) and one more flight is waiting for startup before your flight. In such case also the commander is going to inform you that there is an ATC delay and your flight has been slotted at number 6 for departure.